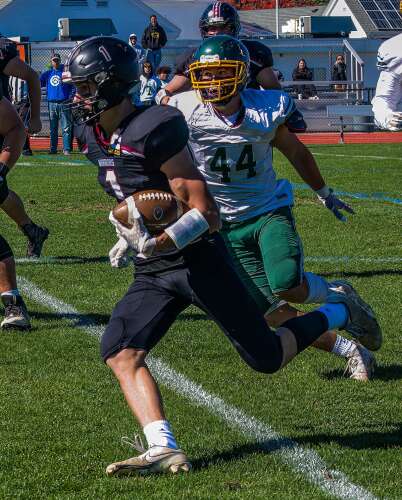 Senior Audrey Board helped the Warriors win all three games last week as Valley took her overall record to 10-7 this year. Photo by Wesley Bunnell/The Courier

The Valley Regional-Old Lyme football team went unbeaten this season after recording a shutout win over a divisional opponent on the road last week. On October 20, the Warriors won a 28-0 road victory over Capital-Achievement in a Pequot Conference Sassacus Division contest to improve to 5-0 on aggregate with a 4-0 record in the division this year.

Senior Didi Jean-Pierre rushed for 2 touchdowns and also caught a TD pass to help VR-OL earn their fifth win and second shutout of the campaign. On defense, Jean-Pierre, senior Nick Cox and senior Andrew Yermenson each had an interception to lead a Warriors unit that forced 6 turnovers in the contest.

After a scoreless first quarter, junior Grady Lacourcière threw a 14-touchdown pass to Jean-Pierre to put VR-OL on the board in the second quarter. Senior Jake Rand kicked the extra point to give the Warriors a 7-0 lead that held at halftime.

Jean-Pierre ran for a 15-yard touchdown for the Warriors in the third quarter. Rand hit the extra run to increase the team’s lead to 14-0 entering the fourth.

VR-OL wrapped up the win by scoring a pair of touchdowns in the final period. Rand scored on a 17-yard TD run and then hit the PAT to put the Warriors up 21-0. Later in the period, Jean-Pierre interrupted a 12-yard touchdown run for his third score of the game. Rand’s fourth extra point of the night ended VR-OL’s 28-0 victory.

Jean-Pierre rushed the ball 8 times for 79 yards and a touchdown to go with 2 catches for 28 yards and a score. He also completed 3 passes for 77 yards to go with an interception and 4 tackles on defense.

Cox rushed 3 times for 28 yards and also had 4 receptions for 44 yards. On defense, Cox had 8 tackles and picked up an interception in the win.

Yermenson had 2 catches for 41 yards for VR-OL. Yermenson also landed an interception in defense for head coach Hill Gbunblee’s club.

The Warriors play a marquee game against Pequot Conference Sassacus Division opponent Cromwell-Portland on Friday, October 28. Like VR-OL, the Panthers enter the competition with a 5-0 overall record and a 4-0 mark in the division. The match kicks off at 6.30pm at Pierson Park in Cromwell.

The Valley Regional women’s volleyball team improved to 10-7 this season after winning all three of their meetings last week. The Warriors picked up wins over Haddam-Killingworth, Old Lyme and North Branford to have a perfect week on the pitch.

Senior captain Audrey Board recorded 12 kills to go along with 4 solo blocks for Valley in the win. Senior captain Sophie Scrivo had 22 assists with 10 digs and 3 kills, senior captain Kaia Karcich recorded 24 digs with 5 aces and fellow senior Brooke Rankin finished the game with 6 kills, 3 digs and 3 aces . Other seniors on the team who were honored on Senior Night are Raquel Farray, Addison Keyworth, Lily Frese and Riley Burch.

Karcich had 19 digs and 4 aces, while Board had 4 kills with 2 blocks for the Warriors. Junior Natalie Novak had 6 digs and also served 4 aces in the win.

Scrivo dished out 11 assists to go along with 5 digs and 3 aces for Valley. Junior Joanna Petrone finished with 15 digs and 3 aces in the win. The board posted 6 kills and 3 blocks for head coach Sofia Cullina’s team.

Valley hosts Innovation for a game on Thursday, October 27 at 6 p.m. The Warriors next face East Lyme on the road at 5:30 p.m. on Friday, October 28.

The Valley Regional field hockey team held a pair of games on their home turf last week and came away from the slate with a win and a tie. The Warriors picked up a win over Somers-Rockville then played New Fairfield to a draw in recent action, setting the team record at 7-4-3 this year.

On October 21, Valley hosted the Somers-Rockville co-op team and took a 4-0 win in the contest. Junior Clara Shea scored 2 goals and had 1 assist for the Warriors in the win. Rookie Bella Rice scored 1 goal with 1 assist, while senior Mykenzie Parker also scored a goal. Senior Fallyn Belisle made 1 save in net for the shutout.

The following day, the Warriors played a home game against New Fairfield and battled the Rebels to a 0–0 draw at Valley Regional High School. Belisle got another shutout by making 3 saves in the game.

Valley has two more games on its regular season schedule this year. The Warriors will play a game on the road against Somers-Rockville on Thursday, October 27 at 4:30 p.m. and then return to the road to face Granby on Saturday, October 29 at noon.

Senior Quentin Baron was next for the Warriors at Shorelines. Baron came in 35th place running a time of 18:50.3 for the 5k run.

The Warriors will play in the SS Class State Championship game at Wickham Park on Saturday, October 29 at 1:30 p.m.

Sophomore Campbell Massey led the Valley field taking 42nd at Shorelines. Massey crossed the finish line with a time of 23:37.6 on his way to finishing 42nd on behalf of Valley Regional.

Valley is competing in the SS Class State Championship at Wickham Park this weekend. The state meet is at 12:55 p.m. on Saturday, October 29.

The Valley Regional men’s soccer team has suffered two recent losses to improve to 4-10-1 this season. The Warriors lost games to Morgan and Cromwell last week.

In his first game of the week, Valley suffered a 3-1 road loss to Morgan on October 17. Senior Jake McKenna scored the Warriors’ lone goal of the game. Sophomore Kenny Batt and sophomore Cameron Costanzo combined to make 9 saves in net for Valley Regional.

Then, on October 20, the Warriors hosted Cromwell and suffered a 4-2 loss to the Panthers at Valley Regional High School. Senior Michael Kollmer scored 2 goals for Valley in the contest. McKenna and second Joe Welch both had 1 assist. Batt and Costanzo combined for 8 saves in head coach Mick Fearon’s team goal.

On October 18, Valley suffered a 3-0 loss to Morgan in a home game. Two days later, the Warriors were on the road to face Cromwell and lost to the Panthers by a score of 3-0. The Warriors then hosted Ledyard on October 22 and lost a 3-2 decision to the Valley Regional High School Colonels.

Valley will wrap up the regular season with road games against Westbrook and East Lyme this week.

The Old Lyme-Valley Regional-Old Saybrook (OL-VR-OS) Cooperative Women’s Swimming and Diving Team took on Fitch-Stonington-Wheeler-New London in a road meet last week. The Wildcats suffered an 83-71 loss in the contest held on the UConn campus on Oct. 18.

OL-VR-OS has a road encounter against Suffield at Windsor Locks High School in its regular season finale on Tuesday, Oct. 25 at 4 p.m.

Overview: becoming one with the Suffolk landscape | Photography

“Balance is now part of most people’s consciousness”