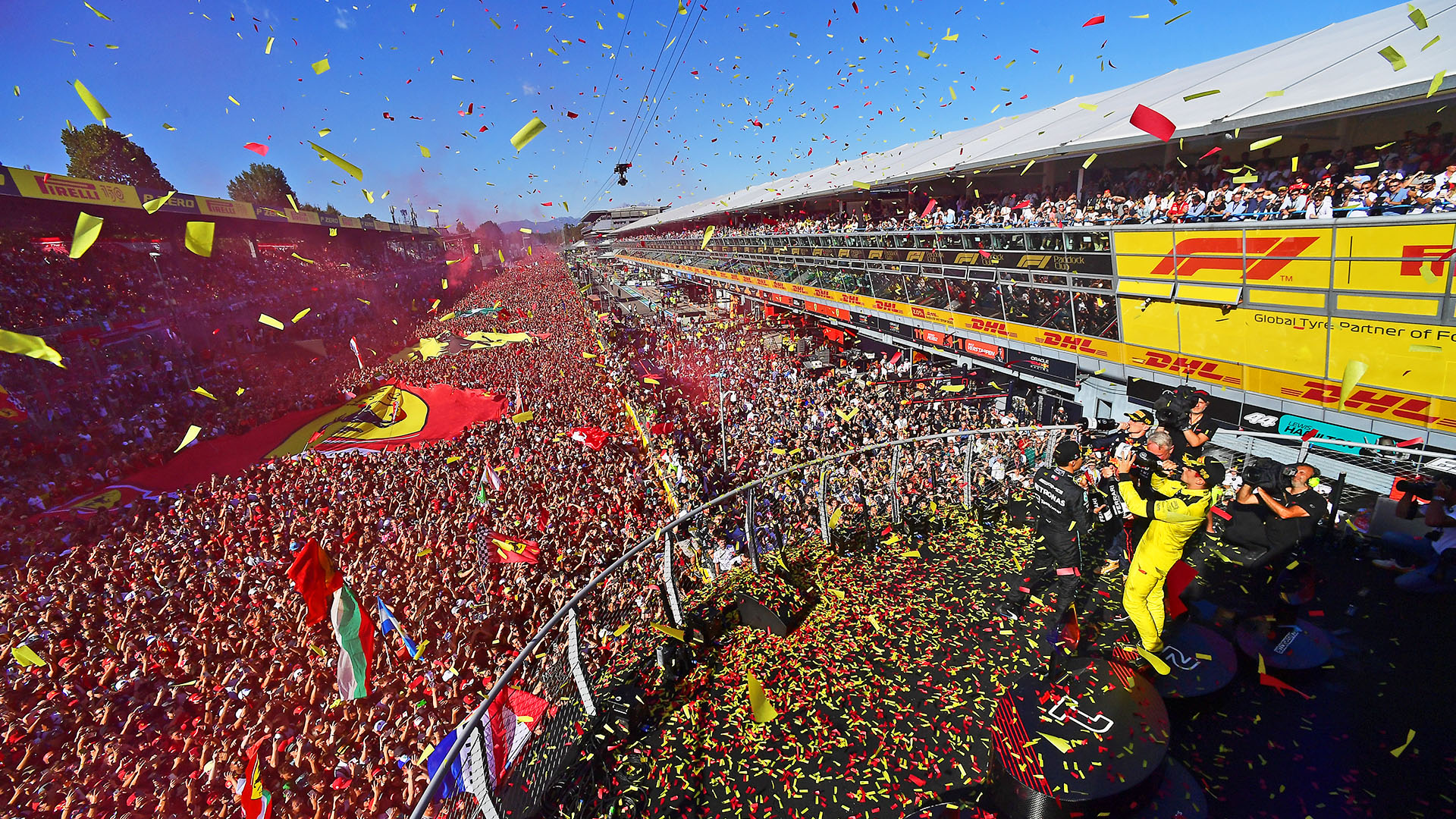 TREMAYNE: Why past and present came together at last weekend’s Italian Grand Prix

They call Monza the cathedral of speed, so in many ways after the Italian Grand Prix it’s a good time to reflect, as one might in such a place, on the state of F1 racing.

The Autodromo is the oldest F1 circuit and the third oldest paved track in the sport. Brooklands came first, courtesy of Hugh Fortescue Locke-King in 1907, followed by Carl G. Fisher’s Indianapolis Motor Speedway in 1909. And there were only two occasions when it failed to host the Italian GP: the inaugural year of the event in 1921 when it was staged at Brescia, and 1980, when it went to Imola as Monza was undergoing changes.

History seeps through every pore and there are ghosts of great racers in every shadow. It’s one of those places where you come to remember and commune with them.

In 1922, the first GP held there attracted 39 cars; just eight made the grid and just three finished, with the Fiats of rising superstar Pietro Bordino and the veteran he once drove for as a mechanic, Felipe Nazzaro, finishing one-two.

The Red Devil, as Bordino became known, averaged 86.906 mph for 5 hours, 43 minutes and 13 seconds, racing not only on the road course but also on the banking made famous by two races in the 1950s that brought together F1 cars and Indy roadsters, then in the 1966 film grand prizewhich fictionally covered the title fight between Pete Aron and Jean-Pierre Sarti.

In 1971 Peter Gethin won the last race on the road course, before the arrival of the chicanes which today provide so much argy-bargy, Gethin averaging 150.76 mph and leading home Ronnie Peterson, Francois Cevert , Mike Hailwood and Howden Ganley, with all five covered by just six tenths of a second.

There have been many great races here, and this year marks Pirelli’s 150th anniversary and Ferrari’s 75th anniversary, so the celebration was in tune. I rather liked the yellow that Ferrari introduced on its engine hoods and on the overalls and helmets of the drivers. It reminded me of the time in the 1960s when the Belgian National Team used Ferraris – in yellow – for Willy Mairesse and Lucien Bianchi.

Earlier in the week we visited the Autolook Week Torino event organized by Andrea Levy and technical artist Paolo d’Alessio. It included an awards ceremony at the Officine Grandi Riparazioni in the center of town, and an exhibition of F1, endurance and rally cars in Piazza San Carlo, including a Gilles Villeneuve Ferrari 312 T5, a Michael Schumacher Ferrari F399 and an Alberto Ascari Ferrari 500 F2 – although a personal favorite was the 130 hp 1907 FIAT, whose engine beat at what seemed like five rpm. It was another reminder of the sport’s heritage, and the efforts of Pirelli and Ferrari were duly rewarded.

2022 is also Monza’s 100th anniversary, and on Saturday it was exactly half a century since Emerson Fittipaldi took victory in his black and gold Lotus 72 to clinch his first world championship. Emerson, of course, was present and demonstrated the magnificent machine every day.

Classic Team Lotus had brought a second 72 shared by Mika Salo and Jacques Villeneuve, a Gold Leaf 49 helmed by Damon Hill and Karun Chandhok, and the gold and black 56B turbine entrusted to Johnny Herbert. It’s something Liberty Media does better and better, and it’s important the sport finds such events to help remind existing fans of its history and legacy, and introduce it to new ones.

At the same time it’s always important to keep up with the times, and through Sky TV and other broadcasters he’s doing a terrific job of not only covering F1 but also drawing from the MotoGP playbook to provide a great coverage of Formula 2 and Formula 3, so future drivers – like Nyck de Vries, who did a stellar job on Saturday and Sunday – are already familiar when they take the plunge.

I particularly liked the story of how Max Verstappen, preparing for a fourth-tier Double Dutch start after a penalty dropped him five places, gave his compatriot some words of wisdom and encouragement before departure. And how Nyck then put on a terrific performance to race under serious pressure throughout the 53 laps, only mistaking once when he was struggling with a brake problem, and brought the Williams FW44 back d ‘Alex Albon at home with an excellent ninth place on his debut.

At first glance I can’t think of another driver who started his weekend in a different make of car – Nyck did FP1 duty for Aston Martin – before moving to another team to debut and take points on the first try. As job interviews go on, they don’t do better than that!

There was some disappointment in some quarters when the race ended under the safety car. I know there is a general wish that this does not happen and in the past we have seen this affect race results but the fact is that Charles Leclerc had been 16.6 seconds behind winner Max Verstappen on lap 46, just before Daniel Ricciardo’s broken McLaren was forced to roll out – and even on his soft tires compared to Max’s mediums, he had only eaten up the deficit. Even Charles thought he would have been lucky to beat him if it had been a shootout on the last lap.

In my opinion, the right person won, and he did so for the 11th time this year and the fifth in a row. It’s another classic F1 era. The cars are fast, there are once again three teams racing up front or close enough to make it interesting, and the midfield extends to the back line.

Yes, Red Bull dominates after sharing glory earlier in the year with the revitalized Ferrari, but if you were to suggest to Max that what he’s doing right now is easy, he’d tell you a different story. Just like Lewis would have done over the years of the first turbo-hybrid formula. The best often make things look easy – that’s why they’re the best – but any team that consistently wins can be counted on to paddle frantically under a seemingly calm surface.

With just six races to go, we should be grateful that Mercedes’ racing pace is generally starting to match that of Ferrari and, at times, Red Bull, and hope there will be closer battles for victory in the championship. But whichever way you slice it, as Max heads to Singapore with a chance to clinch his second title, he will have earned it in exactly the same way as every other great champion has won theirs before him. .

Of course, the Monza weekend was severely clouded by the passing of Her Majesty Queen Elizabeth II. An advanced pregnancy with her daughter Anne prevented her from attending the first-ever FIA Formula One World Championship Grand Prix, the British/European at Silverstone in 1950, which was attended by her father and mother, King George VI and Queen Elizabeth, her younger sister Princess Margaret, and the Earl and Countess Mountbatten of Burma.

Monza was the 1,073rd Grand Prix of the World Championship, and it took the throne in February 1952; thus, she was the reigning monarch for all but 15 of all the Great Trials held to date. Horse racing was her favorite sport, but she would have been keenly aware of the dominant role her country continues to play in world motorsport.