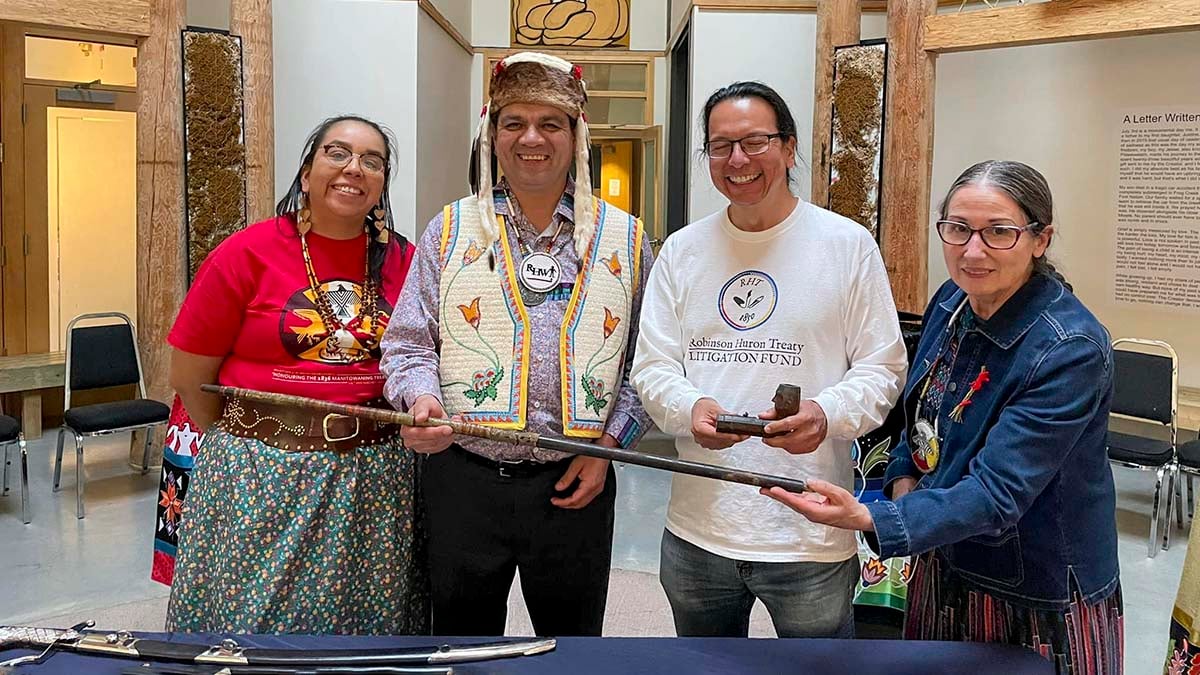 M’CHIGEENG—A moving homecoming took place at the Ojibwe Cultural Foundation (OCF) in M’Chigeeng recently as the Anishinaabe of Mnidoo Mnising welcomed home an important historical artifact, the Bond Head Pipe, most likely presented at the Lieutenant Governor of Upper Canada. Sir Francis Bond Head in 1836 during a treaty giving ceremony held in Manitowaning. The peace pipe bears witness to one of the most significant historical events in Canada: the Manitoulin Treaty of 1836. Scheduled to fall under the hammer of an auctioneer, the pipe was saved at the 11th hour thanks to the timely intervention of Ogimaa Duke Peltier and Wiikwemkoong’s legal team.

The Bond Head Pipe was presented to the entire Anishinaabe community of Manitoulin at a ceremony held at the OCF.

Sir Bond Head described the 1836 treaty ceremony in several of the publications written during his lifetime and included a description of how he came into possession of the pipe. “After the ‘Calumet’, or ‘Peace Pipe’, was lit, each chief smoked it and it was eventually handed over to Sir Francis to smoke and then presented to him by the chief chief. This peace pipe is now a family heirloom.

The Bond Head Pipe is described as “an object that gives voice to an important historical moment in the relationship between Indigenous nations and the colonial government and is an object of significant aesthetic and cultural value. It is important because the pipe provides a testimony of the past as a witness and brings a better understanding of the present.

Pipes such as the one displayed at Sir Bond Head have a heritage stretching back to greater antiquity, with roots firmly in pre-contact culture and traditions. A deeply spiritual object, these pipes were intricately carved by Anishinaabe craftsmen and served as a means of communication with the spirit world, primarily through prayers sent with the rising smoke to the Creator. This ceremonial smoking was central to Aboriginal life long before the arrival of Europeans, and pipes that bear the image of a living being or material object, such as the Bond Head pipe, are often referred to as effigy pipes.

A historical document from the Royal Ontario Museum (ROM) notes that “In the 17th century, Anishinaabe pipe makers near the Straits of Mackinac, between Lake Huron and Lake Michigan, carved with metal tools. This spurred increased production, and with the advent of metal reamers, longer shanks became important. With the advent of metal tools, effigy pipes became increasingly intricate and esoteric, to a degree where the bowls displayed narrative scenes.

“Certain Indigenous communities, including the Anishinaabe of Manitoulin Island, have taken pipe carving to an extraordinarily high artistic level,” the historical description continues. “Their bowls were coveted and acquired by Euro-Canadians who generally had a higher social status.

Given its stylistic characteristics, it is believed that the Bond Head pipe was probably carved by one of the earliest craftsmen rather than one of the later carvers who fulfilled the “tourist” commercial demand for such items.

OCF archivist Naomi Recollet noted that the quest to repatriate the Bond Head Pipe began a few years ago when it was brought to the attention of Wiikwemkoong Ogimaa Duke Peltier that the pipe was being auction through the Bonhams Auction House in San Francisco. The pipe had an estimated auction value of US$20,000 to US$40,000.

Ogimaa Peltier was contacted by one of Wiikwemkoong’s lawyers with an offer of assistance in saving the pipe from the hammer.

“Our historical research and our legal community learned that the pipe was going to be auctioned,” recalls Ogimaa Peltier. “We contacted one of the lawyers who works for us and they offered to help us.”

In due course, the ROM became involved, and following conversations with the auction house and the pipe’s previous owner, the Bond Head Pipe was removed from auction. The pipe is currently under ROM “stewardship” until a more permanent home on Manitoulin can be secured.

“The event at OCF was the first time the pipe was presented to the entire Anishinaabe community,” said Ogimaa Peltier. “We organized a ceremony with him, celebrated the ancestors who created him and presented him. At the OCF, I shared the history of the pipe as I knew it.

Ogimaa Peltier noted that the pipe has deep meaning for his community and for all Anishinaabe on Turtle Island, especially given the ongoing controversies surrounding later treaties that continue to the present day.