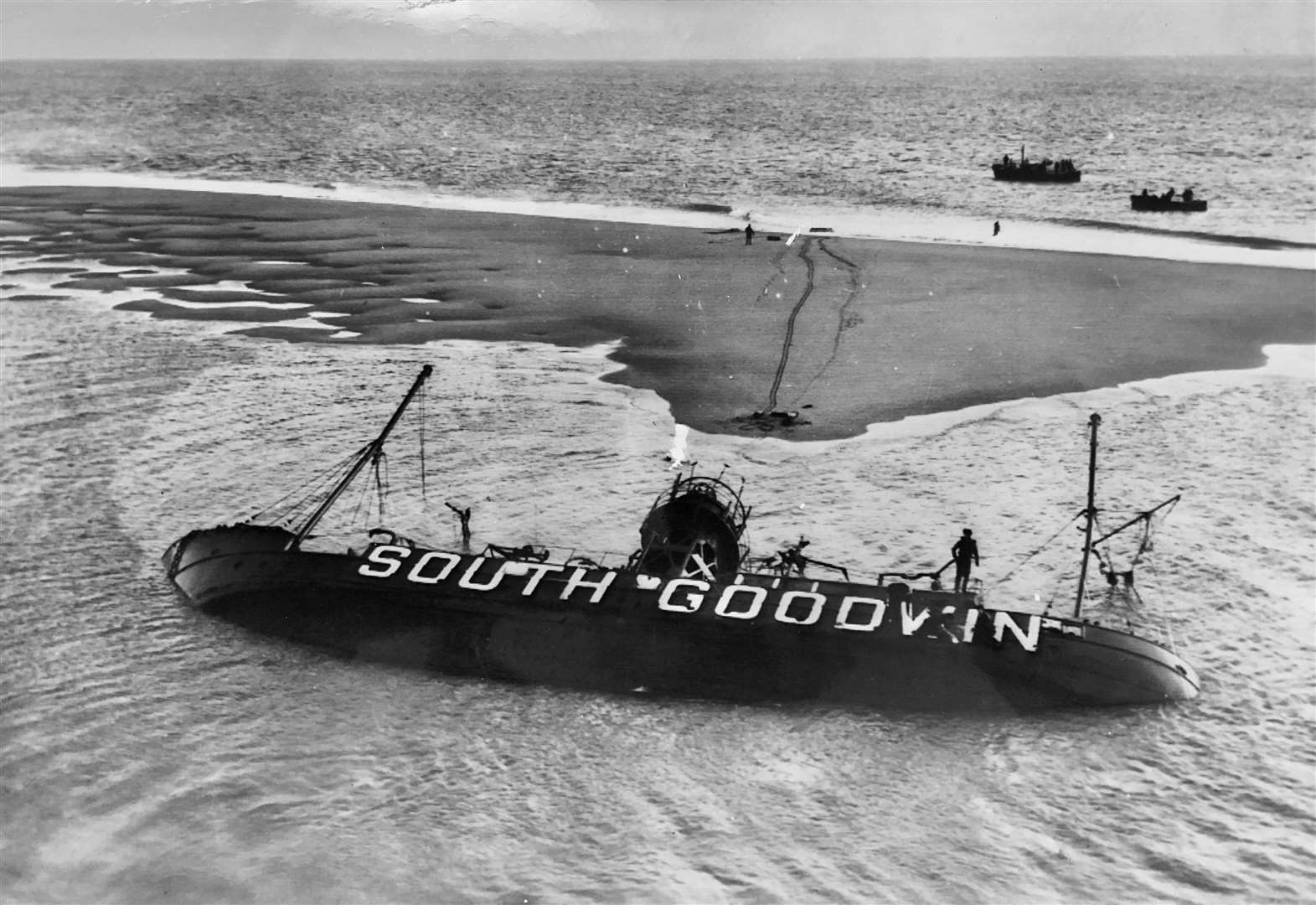 Together they form the famous Goodwin Sands, which stretch 10 miles from Ramsgate to St Margaret’s Bay and vary in width from one to two miles.

The mystery surrounding the claw-shaped shores known as the North and South Stirrup begins with their origin.

No one knows for sure how the Goodwins were created.

Some say they are the result of a build-up of silt from the River Stour as it exits the English Channel at Pegwell Bay.

The most popular theory, adopted by the Goodwin Sands Conservation Trust (GSCT), is that they were once an island called “Lomea” or “Low Island”.

Julius Caesar mentions the passage of Lomea during the invasion of England, an act commemorated by a stone plaque on Walmer’s seafront, just opposite the Goodwin Sands.

Lomea was considered one of the three islands listed in Roman times, the other two being Richborough and Thanet, which are now both connected to the mainland.

Historians believe that Lomea was inundated in 1099, leaving only a few long and narrow sandbars, which were later named after Godwyn or Godwin Earl of Wessex.

Godwin was the father of King Harold II who was defeated by William the Conqueror at the Battle of Hastings.

For centuries, encounters with hidden banks have given rise to tragic tales.

About 2,000 are known, but many incidents are believed to have gone unrecorded.

Joanna Thompson of GSCT explains why the area is littered with so many wrecks.

She said: “Historically, the Goodwins were such a danger to sailors because they were completely unmarked.

“There were no warning beacons in place until the late 16th century / mid 17th century.

“Today the Sands are marked by the light vessel East Goodwin, 18 marker buoys, an Admiralty map and, of course, a GPS.”

The most recent tragedy was the loss of the light vessel South Goodwins in a severe storm in 1954.

On the night of November 27, one of the most severe storms in two centuries broke and the light ship South Goodwin lost her anchors.

It was driven almost six miles north where it eventually came to a stop near the sandbar at North Goodwin.

Its seven crew members are all dead and their bodies have never been found.

Only one survivor was rescued by a US Navy helicopter; Ronald Murton, a 22-year-old employee of the UK Department of Agriculture who was on board to monitor bird migration, was rescued after eight hours of hanging on to the rigging.

The SS Luray Victory sank in 1946. She was one of several American Liberty Ships to send much-needed supplies to the Allies in Europe just after World War II.

The US government frowned upon the use of pilots around the English Channel and because the Goodwins were not marked on many of their charts, the ships subsequently ran aground.

In 1919, the crews of two ships had to be rescued after stormy weather forced them to join Goodwin Sands.

The barge ketch Corinthian and the smaller ketch Glenavon both left the port of Antwerp on October 31 and were sailing together towards London despite the high winds.

But as the weather got worse, the Corinthian captain, Ernest Leek, decided to flee, to take shelter in Dover.

However, issues with the mainsail saw the vessel drift into the Goodwin Sands, where it eventually began to take on water.

Efforts were made by the captain who lit blankets to signal their distress.

But various delays meant that the lifeboat did not reach them until 17 hours later, by which time scores of men on both ships were killed.

Due to the nature of quicksand, wrecks disappear and reappear as the sands change shape.

The shape of a wreck, the Lady Lovibund, would appear every 50 years as a “ghost ship”.

Accounts suggest she was bound for Porto in Portugal with legend Simon Reed on board celebrating her wedding.

Despite the sailor’s long-held superstition that it was no good luck bringing a woman on board, Reed had brought his wife Annetta with him to the ship.

According to legend, the mate, John Rivers, rival for the hand of the captain’s young wife, walked the bridges with jealous anger.

While the captain, his wife and their guests were celebrating the wedding below deck, the mate was seized with a fit of jealous rage.

Casually pulling a heavy club-shaped belay pin from the rail, the mate stepped gently behind the crew member at the wheel and brought him down to the deck with one crushing blow.

Rivers then grabbed the steering wheel and steered the ship at the traitors Goodwin Sands, killing everyone on board.

A subsequent investigation into the disaster recorded a verdict of mishap.

Rooswijk, Northumberland and Restoration are three wrecks listed as “at risk” by Historic England.

The Dutch East Company (VOC) Rooswijk was built in Amsterdam in 1737 but ran aground on the Goodwin Sands in 1739 while en route from Texel to the East Indies.

The site represents archaeological evidence of the practice of large-scale overseas trade between the Netherlands and Asia during the 18th century.

A large-scale excavation was undertaken in 2017 and 2018, as part of a joint project with the Netherlands Agency for Cultural Heritage and other stakeholders.

The Northumberland was a 70-gun warship built in 1678 as part of the regeneration of the English navy by Samuel Pepys.

It was the first third-rate ship to be built under contract, after realizing that shipyards could not cope with building the number of ships requested.

The warship sank on Goodwin Sands during the “Great Storm” of 1703.

The most recent vessel to be added to the list is HMS Restoration.

The 1,055-ton British warship was built in 1678 and sank in the Great Storm that hit central and southern England in 1703.

Restoration was added to the record this year as a recent geophysical survey revealed that the highly mobile sandbank had almost completely migrated out of the wreckage.

It exposed surviving archeology to a degree not seen in years.

The surviving artifacts, including the wooden remains of the hull and several iron cannons, are now on display.

The history surrounding the Sands is one of the reasons activists fought so fiercely against the Dover Harbor Board’s request to dredge the area.

It was for the aggregate to help build this Dover Western Docks Revival project.

The claim was contested by the Goodwin Sands SOS group but was dismissed after an appeal from the High Court.

The main argument of the SOS group was based on the damage to the environment and the disruption of war graves.

Ms Thompson of GSCT said: “During the great storm which swept across southern England in November 1703, four Royal Navy warships which were anchored at The Downs were swept away to the Goodwin Sands where they were taken. sank and sank with the loss of 1,200 lives.

“They were covered in sand until reports of fishermen’s nets hanging from underwater objects led to their discovery between 1979 and 1984 – just a few years after the dredging of the Goodwin began in 1976.

“Three of these ships, the Northumberland, the Restoration and Stirling Castle are now on the List of Endangered Heritage of Historic England; the wreck of the Mary has not been located but is believed to be found in the same place as Northumberland.

“Despite this protective designation, no research has been undertaken to understand the relationship between the removal of large amounts of sand via aggregate mining and the subsequent discovery of these historic wrecks or any others.”

Stowmarket couple get engaged as they move into a new home

The 21 best books by Julia Quinn, author of the “Bridgerton” series