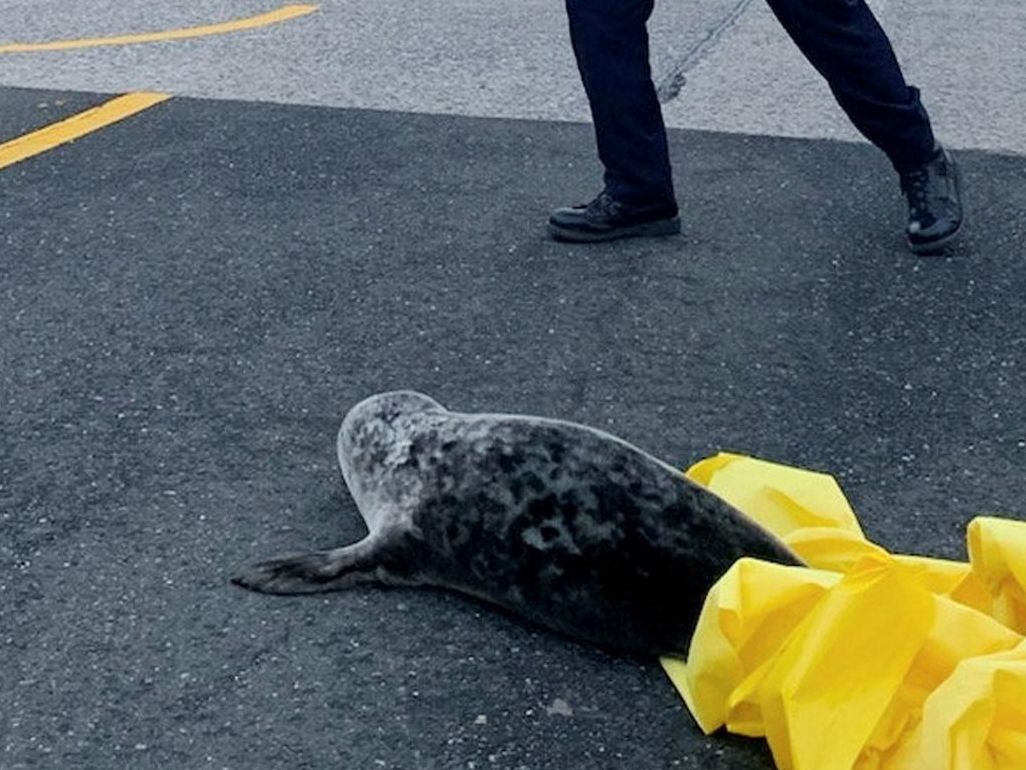 A temperamental gray seal waddled into the car park of a Riverside drinks store on Sunday morning and waddled off with Southampton Town cops in pursuit before the chase ended and a marine rescue group took the animal.

Southampton Police received a 911 call around 6.30am reporting a seal in the parking lot of Thrifty Beverage on Lake Avenue, south of the main street of Riverhead and the Peconic River in the hamlet of Riverside. Police responded and the frightened seal crossed the street towards the Budget Host East End, authorities said. Officers were able to capture the seal after circling it, according to Southampton City Police.

The animal was captured by Southampton Police and handed over to the New York Marine Rescue Center based in Riverhead. The animal is being assessed and cared for by the rescue group and will be released at a later date, police said.

Police believe the animal was feeding on alewife, fish that migrate upstream to spawn in the Peconic River.

Southampton Town Police Sgt. James Cavanagh said police often get calls from seals at this time of year, but he doesn’t recall a time when one was spotted traveling on a road so far from a beach. The easy picking on the glut of fish in the nearby Peconic River, he said, is likely what drew him from the bay.

“Peconic Bay at this time of year fills up with these river herring,” Cavanagh said. “If you pass sometimes, you could almost step on the fish.”

A veterinarian will examine the seal on Monday, but he appears to be in good health, Montello said. She estimated the animal to be about three months old and said it was normal to spot seals in the Peconic River near the foundation’s headquarters in the Long Island Aquarium building on East Main Street.

Gray seals often come out alone after ceasing nursing at about four weeks and remain solitary until they reach maturity.

“Mostly they are small, curious, healthy gray seals just a bit too far from the beach,” Montello said, adding that the organization reported about 20 seal strandings on Sunday alone. “It’s not abnormal that they are alone, looking for food and looking for a place to rest.”

She reminded those spotting the pinnipeds to stay at 150 and report strandings to her organization’s hotline, 631-369-9829.

Letters: A lesson at P&O in ethical leadership | P&O Ferries