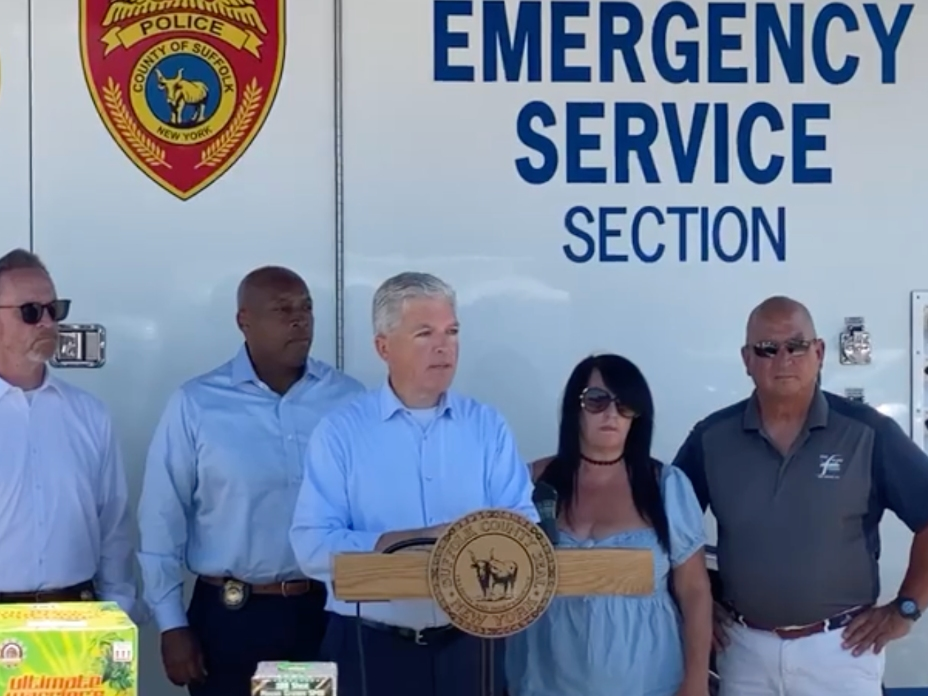 SUFFOLK COUNTY, NY – The 4th of July weekend is just hours away, and Suffolk County officials turned out Thursday to stress the need for safety on the roads, in the water – and at the barbecue .

Gina Lieneck, who lost her 11-year-old daughter Brianna in a horrific boating accident – and who worked tirelessly to see Brianna’s Law, a measure that makes boating safety lessons mandatory, enacted in 2019, was also on hand to urge safety on the island’s long waterways.

Bellone said Long Island, known for its beaches, barbecues and entertainment, is made for the summer season. “But we know that when we celebrate, when people come together, there are also potential dangers. Fireworks are a wonderful thing, but if used incorrectly and in the wrong hands, they are extremely dangerous,” he said.

Bellone also urged residents not to drink or take drugs and drive; police will be out in force to keep roads and waterways safe, he said.

“We know the waterways will be packed over the 4th of July weekend and people will have a great time, but unfortunately we have seen tragedies happen because of people acting irresponsibly and illegally.”

Lieck urged boaters to be mindful of the life around them. “We all want to go out and have a good time with our family and friends and make memories, but we don’t want it to end in tragedy,” she said.

Along with taking boating safety classes, she said everyone should wear life jackets. And, she says, “Please don’t drink or be under the influence of drugs. You literally set the course of a tragedy.”

No other family should have to endure what theirs did, Lieck said. Even after almost 17 years, “we are still suffering the consequences”.

Lieck said his job was not done; she is advocating for the passage of a BWI law that would mean that if someone is convicted, they will lose their driver’s license.

Harrison said improperly handled fireworks “could be a recipe for disaster”. Last year, a 13-year-old from Suffolk County had a mortar blast in his face and another man had a firecracker in his hand.

He also told the public to watch children, the elderly and the disabled near swimming pools and water, to avoid drowning.

Beckley said that according to statistics, nationally, fireworks-related injuries have almost doubled in three years, with the number of fatalities increasing by 50%.

He also reminded people when lighting the grill to do so safely, with no propane inside. Never leave a grill unattended and always light a gas grill with the lid open to avoid an explosion, he said.

“Remember to be safe,” Beckley said.