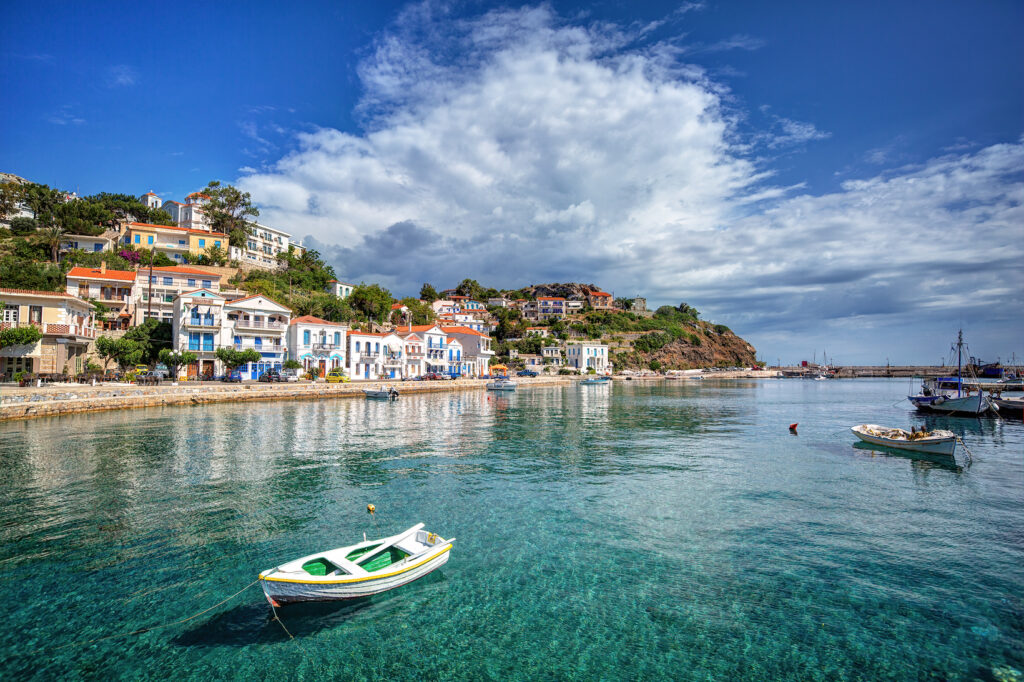 Greece has more than 6,000 islands and islets scattered along its coast. Only 227 are inhabited. Some larger islands have busy airports and attract a resort-type clientele. Others are too small for airports and only have ferry connections – few in the winter months, meaning you’ll have a less crowded and more traditional experience. Even in summer they can be less packed.

Ikaria (also spelled Icaria) falls somewhere in the middle. The mountainous 98-square-mile island in the eastern Aegean has a year-round population of around 8,423 and a small domestic airport at the northeast tip.

The name of the island comes from Greek mythology. Icarus was the son of Daedalus, a craftsman. Between them, they created the labyrinth of Crete where the monster of Knossos, the Minotaur, was kept. In order to escape Crete, Daedalus crafted leather wings to soar. Icarus was impatient and created wax wings to fly higher. His father warned him, but Icarus didn’t listen and flew away, flying too close to the sun and melting his wings, plunging him into the sea. The place where he fell is supposed to be the place where the island was formed.

Expect long stretches of beaches, wild landscapes, authentic people and unique experiences that will stay with you long after you leave. You see, Ikaria is nicknamed “the island where people forget to die”, and it is one of the five blue zones in the world.

What is a blue zone?

Researchers have long pondered why some parts of the world’s population live longer than others. Why do they live longer and healthier?

There are five Blue Zones, identified by writer Dan Buettner and demographers Gianni Pes and Michel Poulain as the places where people live the longest and healthiest lives: Loma Linda in California, the Nicoya Peninsula in Costa Rica, Okinawa in Japan, the region of Barbagia in Sardinia and the island of Ikaria, Greece.

The blue zones are spread all over the world, but they share some commonalities:

The most important is the routine to eliminate stress. Stress is known to lead to chronic health problems, such as intestinal inflammation. Countries in the blue zone are taking steps to limit stress. The Icarians do this by taking regular naps. As someone who likes to sleep, I found it reassuring to know that my nap would be accepted!

Ikaria is an island that has rich traditional values, longevity and a relaxed outlook. Let’s look at some of my favorite experiences in Ikaria, Greece related to the Blue Zone concept.

You will find an abundance of beautiful beaches to choose from on Ikaria; sandy, rocky and organized with deckchairs or hidden coves. The Seychelles beach, named for its blue waters, white sand and white cliffs dropping into the water, is one of the most popular, created years ago by a landslide.

Yet as I was driving my rental car away from the port of Evdilos – the temporary capital of Ikaria during Ottoman rule from 1834 to 1912 – I had to stop when I saw a strip of golden sand and small umbrellas. It was Messakti beach, one of the most popular in Ikaria. The Myrsonas River flows into it, forming a small wetland. With the little blue-domed church of Gialiskaris jutting out to sea in the distance, it was the perfect place to spend the day, dozing on my deckchair and being sure it was reducing my stress levels.

Neoclassical houses, flowered balconies, narrow streets with taverns and cafes, all built amphitheatrically around the port, await you when spending time in the capital of the island.

Agios Kirykos was founded by sailors over 300 years ago, and its harbor and marina make it the main gateway to the island.

It is worth spending time exploring this port. Visit the large, colorful church of Agios Kirykos, the Archaeological Museum housed in a high school hall, or just sit back with a Greek coffee by the water to relax.

It is also worth visiting some unique traditional Ikarian products, such as honey, herbs and olive oil in the organic store, Throubi. You are sure to find a unique gift to take home.

Ikaria is reputed to be the birthplace of Dionysus, the god of wine – and with the Blue Zone concept of healthy Ikaria wine drinking, what better place than to sample the unique wines created here?

The family business Afianes Wines has been growing grapes using organic methods for over 20 years, resulting in an internationally renowned label. During your visit to the cellar you will have the chance to see the wine fermenting in underground clay jars, visit the stone cellar amphitheater with a magnificent view of the countryside and see the granite wine press where the grapes are trodden on foot, in the traditional way. A choice of three guided tours means you’re sure to come away with a new appreciation for this drink.

Ikaria is not known for its nightlife in the traditional sense. But if it’s nightlife you’re looking for, of the alternative kind, then head to Christos Raches, nicknamed ‘The Village That Never Sleeps’.

Strictly speaking, this is not true. The village, with its traditional architecture, is very quiet during the day, with most of its more than 300 inhabitants indoors. They surface and open stores in the early evening, staying open well past midnight.

The custom dates back to the days of the pirates. The locals wanted their village to appear uninhabited to pirates so they wouldn’t be overrun – they would be seen less during the day. Later, the inhabitants worked their land during the day and opened their shops at night, allowing two sources of income. The result, these days, is a quaint hangover from the past and is maintained for tourism reasons.

A visit to Christos Raches persuades you to “go Greek” when it comes to time, another stress-busting exercise.

While at Christos Raches, be sure to pop into the women’s co-op. Founded around 13 years ago by seven local women, each with their own skills to sustain the business, her initiative is to create jobs for local people around the village by making and selling products from ingredients sourced from raw producers on the island. Walk through their door and you’ll find treats such as jams, pastries, pickles, sweet and sour sauces, herbs, candles, and soaps, to name a few.

Browse, chat with them about life in Christos Raches, then take a seat under the plane tree in the square, where their café will serve you a refreshing homemade orangeade or lemonade.

Their co-op incorporates the Blue Zone values ​​of finding a sense of belonging with friends and not just living to work.

If there’s one thing Greeks enjoy, it’s a good Panygiria, which is a traditional village feast and festival that takes place in village squares across the country and its islands. And Ikaria is no exception.

There are several held throughout the year, mostly during the summer months, and they celebrate the patron saint of the particular village.

The panygirias can start at any time of the day and are organized by local cultural associations. Everyone brings a local dish or two to share, not to mention the local Ikarian wine. Benches are set out in the square for people to sit down, eat and catch up. There is also usually a religious service.

The highlight: dancing in the square with live music, traditional island songs, bringing the community of all ages together in celebration and celebration.

In the past, traditional Ikarian costumes – kilts for men and woven linen dresses for women – were worn. You can find examples at the Folklore Museum of Agios Kirykos.

Yes, Ikaria may be an island, but the concept “no man is an island” is alive and well here. You can be alone, but never alone on Ikaria.

Immerse yourself in the Ikaria Longevity Retreat, founded and run by two Greek women who are passionate about sharing the Blue Zone/Ikarian Way with others.

Learn for yourself the secrets of Ikarian longevity, implement them in your daily life (at least for a week) and aim to take them forward.

The week exposes you to the 5 stages of longevity, the Ikarian way. You will learn meditation techniques, eat a plant and fish diet, encourage gentle movement through various aquatic exercises, rest with a midday nap, and connect with each other through theatrical techniques and attending a panygiria. Other courses include cooking and wine tasting.

One thing is sure; you won’t want to leave.