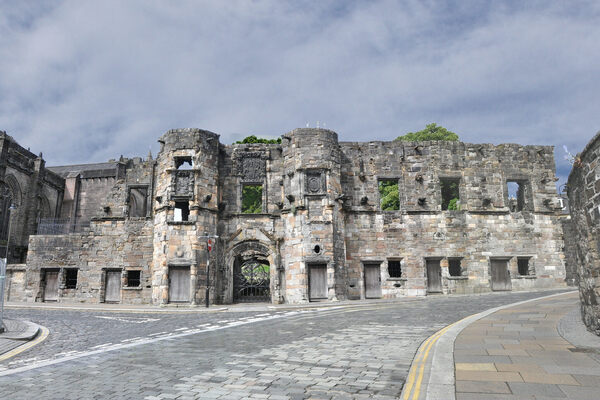 Mar’s Wark was built by John Erskine, the Regent of Scotland and Earl of Mar, who wanted the building to be his primary family residence in Stirling.

Erskine was governor of Edinburgh Castle during the regency of Mary of Guise from 1554 to 1560. However, he turned on his daughter, Mary Queen of Scots, after the murder of her second husband Lord Darnley in 1567. By Consequently, he lost its governor in Edinburgh, but became the hereditary caretaker of Stirling Castle, a post which had been held intermittently by his ancestors since the reign of King Robert I. It is believed to be at this time- where construction of the property began.

The building stands in front of the graveyard of Holy Rude Church, a position that allowed it to also sit at the head of the processional road that climbs the hill to Stirling Castle above the town toll booth. .

The facade is almost symmetrical in design, concentrated around a gatehouse with two polygonal towers. The entrance opened onto a courtyard around which the two-storey lodgings were arranged. The basement vaults have doors and windows that face the street and are believed to have been intended for stores.

The remains of the building are covered with royal and Erskine heraldic inscriptions and ironic inscriptions. Local tradition claims that the sculptures in Mar’s Wark include recycled stones from Cambuskenneth Abbey. If you study the remains closely, a cross of dedication can be found in the masonry, which gives credence to this claim.

Towards the center is the figure of a woman who is tied by crisscrossing ropes. This is believed to represent Joan of Arc, also known as Jeanie Dark by the Scottish soldiers who joined her campaign against the English.

It is often said that the building was never finished, but there is little evidence to support this theory. (Although there may be some truth that it was probably unfinished when Regent Mar died in October 1572.) In fact, evidence indicates that Erskine’s widow, Countess Annabella, used the building for some time after his death. For example, in April 1584, the followers of the Earl of Angus were ordered to return the castle and the city gates of Stirling with the “accommodation of Annabbell, the Countess of Mar and other places of fortification. “. In 1602, a French ambassador, Baron de Tour, recorded his visit to Stirling and a conversation with the Countess in the “House of Lady Mar”.

The 6th Earl of Mar, also known as John Erskine, had the house redeveloped into a barracks during the Jacobite Uprising of 1715, which he led. The failure of the uprising resulted in his exile and the confiscation of family estates, including Mar’s Wark.

The windowless front facade of the building still survives but lacks its upper floor, access to the first floor is usually possible.