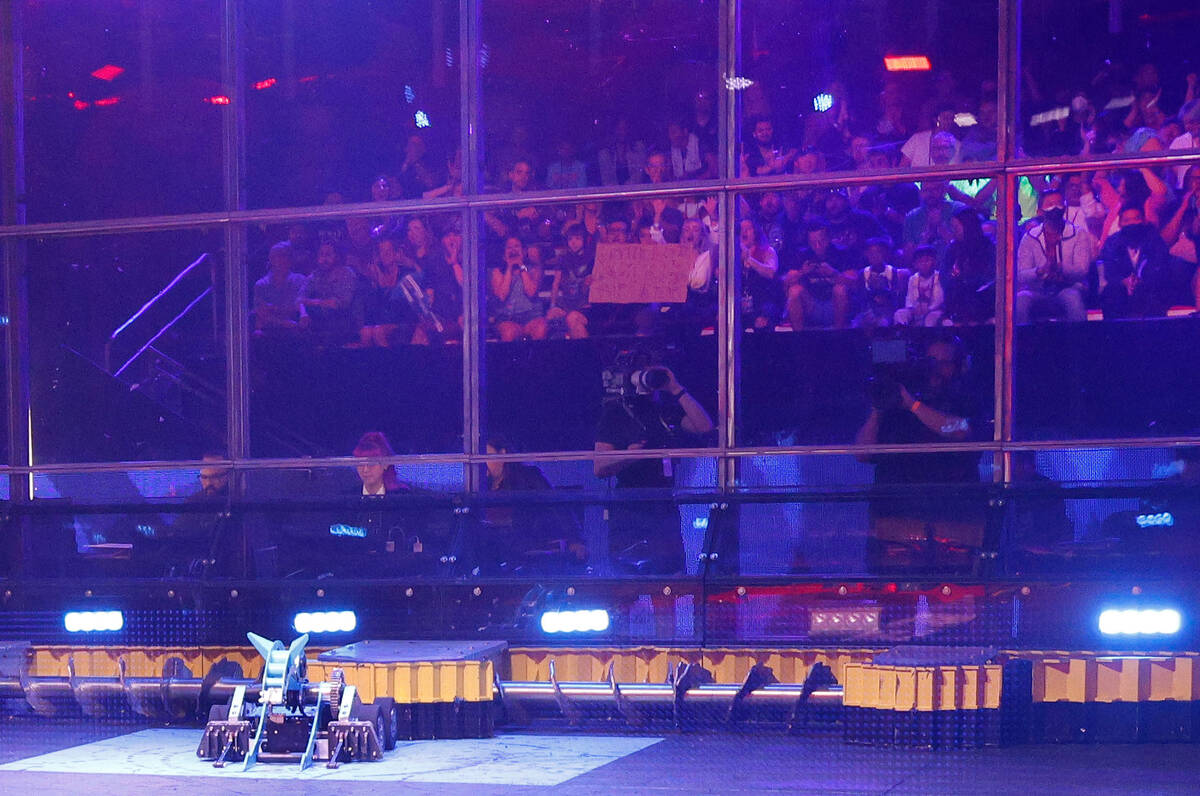 The crowd is a thousand people. We have young and old and people of all stripes holding signs in support of their favorite teams.

There is a pause in the action, an eerie silence as the scene is reset. Fans fill the void by shouting and stamping their feet. Thunder from the metal bleachers fills the arena.

These people get impatient quickly. They want more fights from the “BattleBots”. In Las Vegas, they’re about to get it.

“BattleBots: Destruct-A-Thon” opens Feb. 3 at Caesars Entertainment Studios’ BattleBox Arena. Show times are at 6 p.m. on Thursdays, Fridays and Saturdays, with matinees at 3 p.m. on Saturdays and noon on Sundays. Tickets go on sale November 14. Prices range from $49 for general admission, with $150 family packages, to $125 VIP packages where guests are allowed to see the robots and their crews up close before and after the show.

All the destruction happens at the BattleBox Arena, the reinforced, multi-purpose tent room behind Bally’s on Koval Lane. The nondescript facility may look like a street flea market, but it’s a rowdy house. Throughout this month, this is where “BattleBots World Championship VII” was filmed. Final registration is Sunday. The contest airs in January on Discovery.

Without a doubt, the “BattleBots: Destruct-A-Thon” show is the first production of its kind in Las Vegas Vegas. It’s Crush du Soleil, the only daily live, pay-to-play robotic combat show.

Aesthetically, the show is a success even before its premiere.

“We know this live show will be a huge success. It will feature the most famous combat robots on the planet, and they will fight to the death every night,” said the CEO of BattleBots. Trey Roski said. “This will be the most violent spectacle in Las Vegas where no one will ever be hurt. The robot apocalypse begins soon!”

Roski is the son of Ed Roski, owner of the Silverton hotel-casino in Las Vegas. Young Roski and his cousin Greg Munsonweb design business partners for decades, developed “BattleBots” in 1999.

The format and subsequent cable series became an international sensation. The competitions are seen in more than 150 countries. “BattleBots” has 10 million social media followers. More than 50 teams from the United States, Europe, Asia, New Zealand, Australia and South America traveled to Las Vegas for the “World Championship VII” tournament.

Executive producer Tom Gutteridge is a BBC alumnus who produced entertainment shows and documentaries. “The Hot Shoe Show” and “Russell Harty” talk shows dot his resume. He also led the Andrew Lloyd Webber musical “Song & Dance” for BBC TV. Most recently, Gutteridge was a senior executive at FremantleMedia, working on “American Idol” and “The Price is Right.”

Gutteridge joined “BattleBots” in 2016 and helped design its global expansion. He’s continually crafting marketing strategies, from signage at Harry Reid International Airport to a flashy new “BattleBots” slot machine set to premiere in Vegas by the end of the year.

Gutteridge is confident the show will find its audience in Las Vegas. The theatrical show he and his team developed differs from the championship tournament, in that it does not end with a single winning team. The destruction is limited to a single performance of 80 minutes.

The producers have launched a casting call for artists who can play the roles of fighters. From the post, “You don’t have to design robots, just act like you’re competing.” The emcees and crew members, male and female, fill roles for the Vegas show.

There will be five fights per night with two costumed team members per fight. Team members perform the ride, pretending to drive the robots, while the real robot drivers are at the controls. These actors react to the action and hired performers conduct interviews at the end of each fight.

But the stars are the robots.

If you haven’t already, get to know Witch Doctor, Kraken, Mammoth, Lock-Jaw, Hypershock and Whiplash, as well as a host of new bots specially created for the BattleBox Arena. It’s far from Cirque, Celine and Spiegelworld. But the “BattleBots” are ready to play in Vegas.

Magic that should sound familiar to fans of Las Vegas entertainment will be featured Monday on NBC’s “Today.” Check it, adjust the VCR, whatever.

A well-known and colorful Las Vegas hospitality visionary is cutting ties with several nightlife businesses. This person, who has animated the city for fifteen years, is about to announce something new.

Area15 added a third screening of “The Rocky Horror Picture Show” to The Portal on Thursday. The first two showings of the absurd musical on Thursday and Friday night sold out. It’s the kind of party the developers at Area15 envisioned when designing the 360-degree, projection-mapped entertainment venue.

A full cast accompanies the production of the 1975 cult classic. Brandon Pereydaalias the acrobat Axle for a dozen years in “Zumanity”, plays the main role of the unbeatable Frank-N-Furter. Jon Morgan (swing in “Zombie Burlesque” and singer with an amazing range) hosts the pre-show and plays Columbia.

Judging by Friday’s congregation, the purist “Rocky Horror” fanbase is still a force.

The crowd shouted encores throughout and performed “The Time Warp” dance, en masse. Many were in costume. Great so see the Vegas artist cheryl daro (her husband is the founder of The Space Mark Shunock) triumphs in the pre-show costume contest in her Magenta outfit.

It’s late, with Morgan’s pre-show starting around 11 p.m. and screening at midnight. But worth the sleep deprivation. As they say, we’ll take a nap later.

Live from not the sands

Similar to Frank-N-Furter, Frank Sinatra is proud of his longevity in VegasVille.

“Frankly, Frank” opens Nov. 6 at the modern Alexis Park Exhibit Halls. Shows run at 5:30 p.m. Thursday through Sunday, indefinitely. This one has an impressive lineage from Sinatra. Gary Anthony, who for decades has been performing under the name Old Blue Eyes, is the star. Expect the classics (“Luck Be A Lady,” “Summer Wind,” “Fly Me to The Moon”), some deep cuts, and a thoughtful trip down the city’s entertainment past.

The Stirling Club welcomes a triumvirate – a triumvirate, I tell you! — from BD at 8 p.m. (doors 7 p.m.) on Friday. Kathleen Dunbar, Dennis Blair and Ed Regine appear in the club’s new comedy night. Tickets are $25 for members, $35 for non-members. Go to TheStirlingClub.com for information.

2 charged with DWI after Fiery LI crash; 1 Had A Minor In The Car: The Police