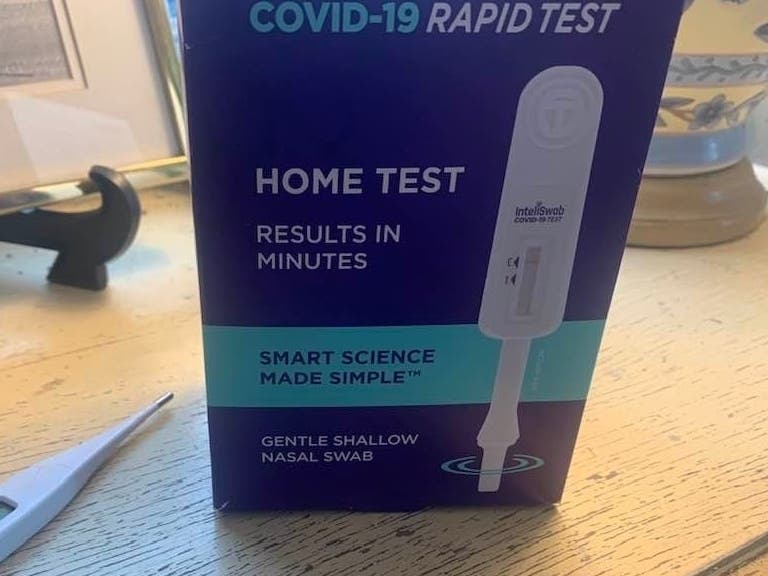 LONG ISLAND, NY – Suddenly it was like March 2020, when the frantic search for Clorox wipes and toilet paper defined our collective days: walking into pharmacy after pharmacy this week, and even into a supermarket or two – there wasn’t a single rapid coronavirus antigen test to be found for miles on Long Island.

And that’s not all: Long Islanders desperate to know if they’ve caught the highly transmissible variant of omicron line up at walk-in clinics and testing sites, standing for hours in scenes reminiscent of last year’s surge.

On Long Island and parts of the country, rapid test kits are scarce and in many places simply non-existent as positivity rates rise, coupled with the perfect storm of the new omicron variant and desperate people. boarding a plane and leaving for their vacation plans left stores empty and frustrations boiling over.

The question echoed all over the counters: where are all the home test kits?

On Tuesday evening, at a CVS on Long Island, an employee, anticipating the question, answered the phone with “Hello, this is CVS. We are out of COVID testing.”

Although Governor Kathy Hochul predicted a winter wave for months, experts say no one anticipated the omicron variant, which has skyrocketed new cases and multiplied at breakneck speeds.

President Joe Biden, addressing the issue on Tuesday, said the omicron variant was the reason for the testing shortage, according to the Financial Times.

Biden on Tuesday described his intention to purchase and distribute 500 million home test kits, according to Fox News.

“All of a sudden it was like everyone was rushing to the counter. So I tried to meet with the companies and use the Defense Production Act to get half a billion more tests.” , Biden said, according to Fox News.

But while Biden said he believed the paucity of testing was due to the rapidly spreading omicron variant – and some pointed to shortages of materials and workers at all levels – others urged the federal government to act.

On Monday, speaking by Hochul, who said 10 million over-the-counter kits will arrive in New York City before the New Year, Kathryn Garcia, state operations manager, said New Yorkers will have 5 million before New Years and another 5 million in January. About 2 million will go to school districts because the goal is to keep children in school, she said. Another million tests will be sent to county emergency officials, with 1.6 million tests destined for New York and 400,000 tests for vaccination sites.

â€œIt’s good progress, but we still need more and we need more partnership from the federal government,â€ Garcia said. â€œWe need them to make sure that testing is available for everyone who needs it, as we will continue to drum up the drumbeat that we want you to be able to take personal responsibility and protect your loved ones knowing if you are positive. or not. with COVID, and to stop the transmission. “

Garcia called on the federal government to invoke the Defense Production Act, which would allow private manufacturers to produce more over-the-counter tests.

Garcia also reminded New Yorkers to make sure their home tested children are approved by the CDC or the U.S. Food and Drug Administration.

Department of Homeland Security Acting Commissioner of Emergency Services Jackie Bray said New York is stepping up testing to ensure New Yorkers have a myriad of ways to access those tests.

“We know there are long lines, it’s because people do the right thing, they ask for a test when they need it to protect each other,” he said. she declared.

Bray recalled that there are more than 1,800 existing test sites statewide.

Seven new testing sites will open this week, including one in Nassau County, she said.

And also on Monday, Hochul announced a new online testing portal where New Yorkers can order home PCR tests, which will be mailed overnight. People can swab themselves, put the tampon in the prepaid envelope, send it back and get results in 48 hours, Hochul said.

Some, however, believe that the amplified test distribution will still not be enough: according to Vox, between 3 and 5 million tests could be needed each day by February.

The New York Times reported that in a country of 330 million people, the 500 million tests Biden promised will probably not even be enough for two tests each, with each test only useful for a day.

On Tuesday, Hochul thanked Biden for his leadership in tackling the winter outbreak of COVID-19 nationwide “and for taking comprehensive action against the rapid spread of the Omicron variant.”

Biden, she said, is responding to New York’s requests for additional staff to support hospitals and health systems that are stretched, including the deployment of 30 ambulances with staff to areas upstate. ; new mass testing sites, including the first to be operational in New York before Christmas; and rapid tests sent directly to Americans in their homes.

â€œThis is real leadership,â€ Hochul said. “I look forward to our continued partnership with the Biden administration to assist New York State as we fight the surge of winter.”

Additionally, as residents of Long Island desperately searched for home test kits, Attorney General Letitia James warned of the price hikes. A standard BinaxNOW test costs between $ 14 and $ 25 for a pack of two tests, but James said his office has received reports of some places selling them for $ 40 to $ 70 per package.