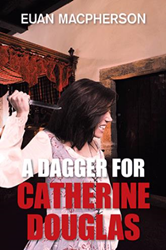 In this historical novel based on a true story, a lady-in-waiting finds herself at the center of a plot to assassinate James I, King of Scotland.

When Euan Macpherson was 10, he was given a book on Scottish history to read. He had grown up with stories where the good guys always won in the end. When he first read the story of Catherine Douglas, he expected her to come out on the winning side, but the good guys didn’t win. The story upsets him, stops reading the history book and never comes back to it.

Based on a true story of the Lady-in-Waiting who found herself at the center of a plot to assassinate James I, King of Scots, Macpherson is now publishing ‘A Dagger for Catherine Douglas’ (published by AuthorHouse UK). We are in 1437, everything is going well for Catherine. She obtained a prestigious post at the Scottish court and a successful marriage to a wealthy merchant was arranged for her.

Sean Campbell, a mercenary with a reputation as a rude cutthroat, shows up in court. Catherine is immediately attracted to him. In the intrigues of court life, no one has friends, there are only ambitious courtiers seeking advancement. But who was promised a promotion when the king died? Is Sean Campbell one of the king’s bodyguards or is he one of the assassins? It’s not just the king’s life that’s in danger. Catherine will learn that even Ladies-in-waiting can be sacrificed in this brutal attempt by an ambitious earl to seize the Scottish throne.

“Women feel they have to imitate men to succeed. It’s a story of female courage – of a woman who couldn’t fight like a man and didn’t try. She sacrificed herself like a mother would to protect a child. She is an example of female courage that deserves admiration,” Macpherson said. When asked what he wants readers to take away from the book, he replies, “I want them to enjoy the book so much that they’ll be disappointed when it comes to an end.” For more details on the book, please visit https://www.authorhouse.com/en-gb/bookstore/bookdetails/832217-a-dagger-for-catherine-douglas

“A Dagger for Catherine Douglas”

Available on Amazon and Barnes & Noble

Euan Macpherson was born in Arbroath on the east coast of Scotland. He studied for an Honors degree in English and Scottish Literature at the University of Stirling. He has made several television and radio appearances, including on BBC Birmingham, BBC Scotland, BBC Radio Scotland and Scottish Television. He has written for newspapers and magazines, in the UK and the US. His first book, The Trial of Jack the Ripper, was published in 2004.

AuthorHouse, a self-publishing brand of Author Solutions, Inc., is a leading provider of book publishing, marketing and sales services for authors worldwide and offers the only suite of services Hollywood book-film sector. Committed to providing the highest level of customer service, AuthorHouse assigns each author personal publishing and marketing consultants who provide guidance throughout the process. Based in Bloomington, Indiana, AuthorHouse celebrates over 23 years of serving authors. For more information or to publish a book, visit authorhouse.co.uk or call 0-800-014-8641.

Share the article on social networks or by e-mail: