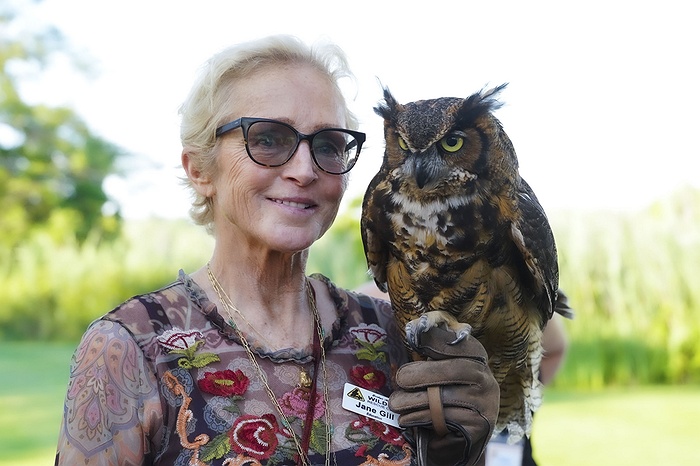 As the Hamptons’ Evelyn Alexander Wildlife Rescue Center continues to successfully rehabilitate and release animals into the wild across eastern Long Island, there was more to celebrate at the 14th Annual GET WILD Benefit . Bridget Fleming and Karen Johnston, DVM were honored at this year’s fundraising event. The event was held at Swans Crossing, Southampton Village and the event chairs for this year’s benefit were Ingrid Edelman, Jane Gill and Jonathan McCann.

Guests were treated to live music, cocktails, light meals and a silent auction. All guests were welcomed to the cocktail party, which included appearances from some of the non-releasable hawks and owls that the Evelyn Alexander Wildlife Rescue Center rehabilitated and who now reside at the center. All proceeds benefited the native wildlife being treated at their hospital.


About Evelyn Alexander Wildlife Rescue Center of the Hamptons


The Evelyn Alexander Wildlife Rescue Center, Inc., the only wildlife hospital on eastern Long Island, is a nonprofit organization dedicated to rehabilitating wildlife affected by human encroachment on their habitat. It’s a grassroots organization that started with a few concerned friends and has grown to include over 3,000 members and supporters. The center operates as a full-service professional wildlife hospital, with licensed rehabilitators, biologists, animal behaviorists and volunteers on staff. Over 300 people have been trained to assist in wildlife rescues. The Evelyn Alexander Wildlife Rescue Center is located on Munn’s Pond Park through a cooperative license agreement with the Suffolk County Department of Parks, Recreation and Conservation. The center is located on a greenbelt of public land parcels that stretches from Tiana Bay to Peconic Bay on the east end of Long Island, New York. This ecosystem is one of a kind and irreplaceable, with salt and fresh water wetlands, pine forests, deciduous forest and grasslands. As a result, it is an ideal location for a wildlife rehabilitation center. The hospital is for wild animals only. There are no ambient noises or smells to stress the wildlife recovering inside, unlike a veterinary hospital. Each year, the Wildlife Rescue Center receives more than 10,000 calls for information or assistance regarding wildlife encounters. In addition, the center offers educational programs to local elementary and secondary schools. Students from local colleges participate in co-operative education programs and internships. The Evelyn Alexander Wildlife Rescue Center has an annual operating budget of over $650,000, funded almost entirely by generous donors.