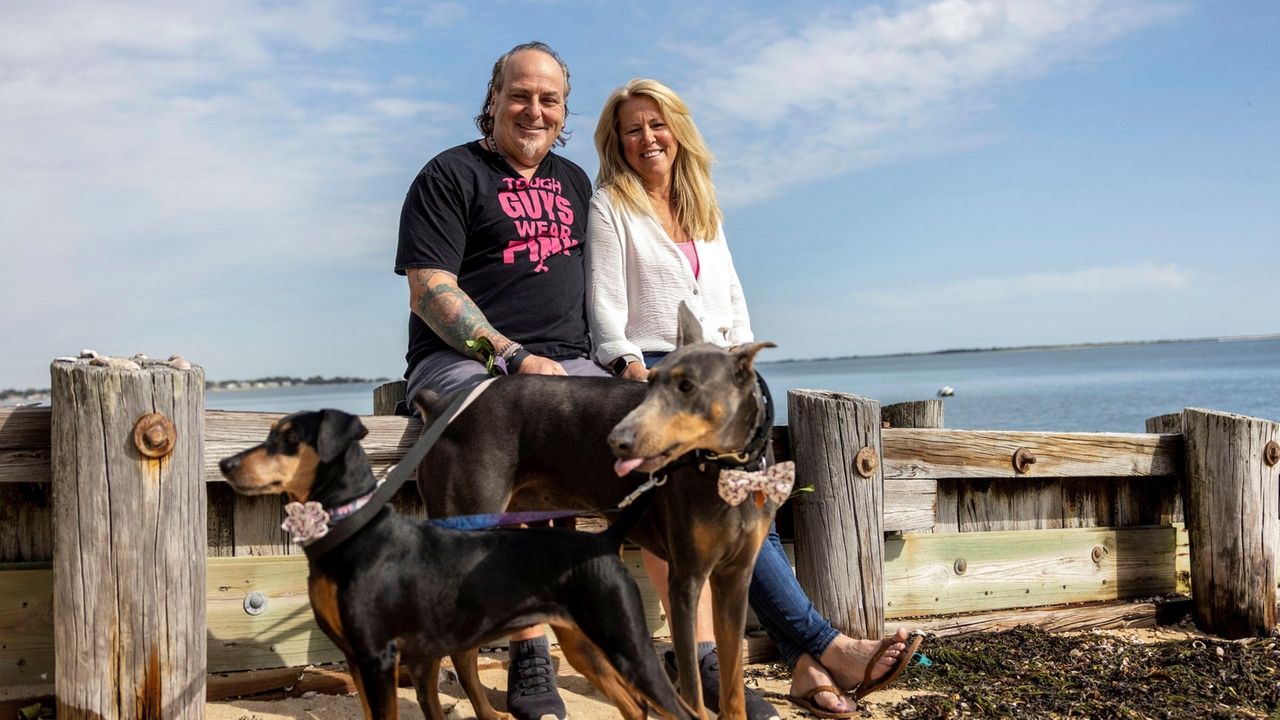 Terry and John Gorga, married for over 30 years, share two daughters, two dogs, a love of the outdoors and a zest for life.

Over the past two years, however, the East Marion couple have also shared something else: a diagnosis of breast cancer.

” I could not believe it. I was blown away,” said John, 62. He had just recovered from surgery and treatment for breast cancer earlier this year and then Terry, 57, was diagnosed.

They both had left breast cancer.

WHAT THERE IS TO KNOW

“What are the odds – two people in the same house, on the same side?” he said.

The American Cancer Society has stated that a man’s lifetime risk of getting breast cancer is 1 in 833, while a woman’s is 1 in 8.

A diagnosis between husband and wife, while not unprecedented, also seems extremely rare.

“I have been practicing breast oncology for 15 years,” said Dr. Arif Kamal, patient manager for the American Cancer Society. “I’ve never heard of that.”

The Gorgas said they want to share their story to raise awareness that breast cancer can affect both women and men.

“Maybe I can help someone else,” John said. “Men don’t like going to the doctor, but you have to go.”

‘A little corner of paradise’, then ‘the speech of death’

Terry and John met in the East End of Long Island in the late 1980s. She grew up on a farm in Mattituck. He was a burly stationary engineer from Local 30 in Queens.

As a child, he had fallen in love with the bucolic North Fork while spending summers and days off at a family home in East Marion.

They married in 1990 and settled in Manorville, where they raised their two daughters, Jacquie and Rachel.

About four years ago, they moved into a house in East Marion that overlooks a lake, steps from the beach and not too far from his job as office manager at Strong’s Water Club Marina in Mattituck.

“It’s like a little piece of heaven,” John said.

The two were sitting by the pool in 2020 when Terry noticed something odd on the left side of John’s chest. He felt a small lump under his nipple.

“It was bulging and the nipple was inverted,” Terry recalled. She told her husband to go to the doctor and get him checked out immediately.

A mammogram and subsequent biopsy confirmed it was breast cancer.

“I didn’t know men got breast cancer until I had it,” John said.

Terry said she and her daughters were in shock when they heard the news. “We had the discussion about death,” Terry admitted. “John is our rock.”

Lee explained John’s condition and his treatment options to the couple in depth, including drawing pictures to explain the procedures.

“She made this shitty experience so much better,” John said.

He was diagnosed with invasive ductal carcinoma, the most common form of breast cancer in men, Lee said. The cancer starts in the breast ducts and, in John’s case, has spread to the lymph nodes.

In December 2020, he underwent a mastectomy and axillary lymph node dissection to remove the tumor and 10 lymph nodes. Three were positive for cancer.

He had returned in time for Christmas.

“Fortunately, the death rate from breast cancer is dropping dramatically,” Lee said, “largely because breast cancer was detected earlier through screening. And the earlier the stage, the better the chance of healing and survival.

After recovering from the operation, John underwent 26 radiation treatments and continues to take drugs to block the estrogen and progesterone that fuels cancer. He undergoes regular screenings to make sure the cancer has not returned and resumes his regular exercise routine.

“It was scary for me”

Earlier this year, Terry went for her annual mammogram. She wasn’t too worried, even after being told there was something suspicious on the mammogram.

“I’ve always had dense breasts, so I had mammograms and ultrasounds,” she said. “I had a biopsy once before and it didn’t turn up anything.”

“He was fed estrogen, the same cancer and the same side as John,” she said. “But it wasn’t as scary.”

“It was scary for me,” John quipped. “And I was worried about our children.”

The couple underwent tests to determine if they had any genetic mutations, including the BRCA gene, that could predispose them – and their children – to breast cancer. They both tested negative.

Terry was also found to have invasive ductal carcinoma in her left breast. Unlike John, the cancer had not spread to his lymph nodes.

“This is my first time treating a couple,” Lee said, adding that she was “unpleasantly surprised” when she found out Terry also had breast cancer. “But they’re both really fantastic and always very positive.”

After reviewing his treatment options with Lee, Terry opted to undergo a lumpectomy with oncoplastic breast surgery, which removed the cancerous tissue and adequate margins around it. At the same time, she underwent reconstructive surgery.

After recovering from surgery, Terry underwent 13 weeks of radiation therapy.

She also takes long-standing medication to block estrogen production, but suffers from some side effects, such as joint pain.

“Radiation doesn’t hurt, it bothers you,” she said. “I’m laying there thinking I have cancer, but I wasn’t sick and I didn’t feel bad.”

She named the radiation machine that towered over her as she lay on a table “Priscilla – the cancer killer”.

Terry and John said they don’t know if some sort of environmental exposure led to their cancer diagnosis.

John’s work as a stationary engineer for decades involved working with equipment such as high pressure boilers, cooling machines and incinerators, as well as locations containing asbestos.

“I was on a farm and helicopters were spraying the fields with pesticides,” Terry said. “We were kids playing in the mud. You didn’t know. It’s crazy. In my head, I always thought something was going to happen to me.”

They also wonder if the water from the well that served their Manorville home was contaminated. The Gorgas said they drank bottled water, but their home was eventually hooked up to the Suffolk County public water system for free.

Still, linking a cancer diagnosis to environmental exposure such as groundwater contamination or pesticides can be difficult, experts said.

“Even though it’s rare, I wouldn’t jump to conclusions about a common exposure,” Kamal said.

“Unfortunately, I think it was just bad luck and coincidence,” Lee said.

Kamal said both men and women can be proactive by discussing their family history of cancer with their doctors. Sometimes that means having sensitive conversations with loved ones to get more information about family illnesses.

“It’s not just that Grandma had cancer. We really need to know what type,” he said. “You should share this with your clinician so they can understand your risk.”

Terry and John said they wanted to share their experience with others, hoping it would inspire them to get screened for cancer.

“It helps so much to talk to people,” Terry said. “It helps your head, and I think it helps people.”

John said he made no secret of his mastectomy scar and felt comfortable going shirtless, even in the summer when he went to the beach.

“I’m a little proud,” he said. “I’m here and I’m grateful…maybe I can help another guy.”

Taiwan seeks to strengthen ties with US trade fair

The family calls for a criminal investigation into the Noyac fire