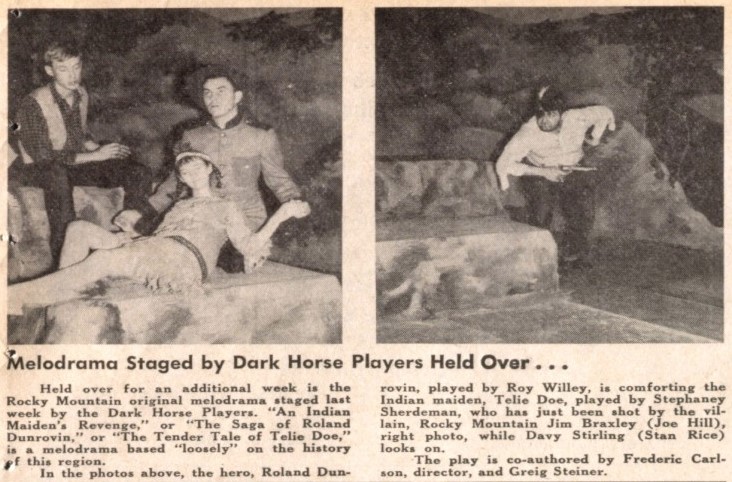 Big title: Legitimate theater will be presented in Estes this summer

Body: Ten college students, majoring in drama, will perform at least ten weeks of legitimate theater this summer in the former ice rink attached to the Dark Horse and Riverside Ballroom. Bert Zumbotel, acting as the group’s commercial director, said there will be seven performances of each piece, including a weekend matinee, and the rink is now being modified to accommodate 300 people seated.

The group, known as All-Star Collegiate Players, is sponsored by a national drama fraternity and will be conducted by Dr. Earl C. Bach of Loretto Heights College and associate producer of Denver Post Opera.

Advertising copy: Dance / 37th edition / Grand opening! / Saturday May 23 – 9 p.m. / John Timmins Orchestra / One of the best dance groups in the area. / John was a regular at the great Woody Herman Band./ Call your friends, throw a party and join the / the fun – or ‘Stag it’ if you prefer. / Special section for guests under 21/90 cents per person / Riverside Ballroom / Draft beer or your favorite cocktail at the old man / Dark Horse Bar

Body: Estes Park’s professional joint stock company, the Dark Horse Players, will open its second season on July 1 with a production of “Harvey,” it was announced this week by Gerald Carlson, director of the company.

The theater will again be located just east of Riverside Ballroom and tickets for all productions will go on sale in the near future.

The tracks “The Moon is Blue”, “Smilin ‘Through”, “Seven Keys to Baldpate”, “King of Hearts”, “The Tender Trap”, “Finian’s Rainbow”, “Charley’s Aunt” are tentatively scheduled for production this summer. , “The Rainmaker” and “Gigi”.

Additionally, there will be a special production of an original melodrama based on the early settlements in Estes Park to celebrate the centennial of the Rocky Mountain Rush.

Body: Frederick (Jerry) Carlson and a dozen members of his Dark Horse theater troupe have arrived in the village and are getting the house ready for the July 1 opening.

Carlson holds a BA from Hastings College and an MA from the University of Nebraska. He plans to teach in California next year.

Company members will be announced next week.

Big title: “Harvey” is the opening piece presented by the players of Dark Horse

A large crowd attended the performance, which stars Roy Willey as Elwood P. Dowd and Stephany Sherdeman as Veta Simmons.

The play will take place every evening until Sunday and a morning will be given on Sunday.

Frederic G. Carlson de Longmont is director of the company.

The troupe’s second production will be a melodrama, â€œHe Done Her Wrong, or Wedded But No Wife,â€ July 8-12.

â€œWe put the situations in the game as they might have happened, rather than as history records them,â€ Carlson said.

The characters range from the city’s founder, Joel Estes, to contemporary artist Dave Stirling, he added.

The Olio acts of the members of the company will be presented during the intermission and after the show. The orchestra includes James Baker on piano and Charles Smith on drums.

Displays in the hall will feature historical objects from Estes Park.

In law, such a career should extend over a number of years. But for 24-year-old Greig Steiner of Baldwin Park, Calif., It’s all in a day’s work. This versatile young man, technical director of the Dark Horse Players, takes everything for granted.

When he was still a very young manâ€¦ at 12â€¦ he became a milliner and, in college, opened a clothing store where he and a friend designed and made original creations ranging from $ 25 chiffon to a $ 2000 wedding dress.

Between 1952 and 155, he appeared in 1,000 Red Cross and USO shows, and performed in Japan, California and Washington, as well as Korea.

He has designed sets for a variety of shows, including “The Rainmaker”, “Arsenic and Old Lace”, “Androcles and the Lion” and “Stalag 17”.

Steiner was technical director of Ft. Lewis Little Theater, where he also danced on television and was lighting director for American Forces Korean Network (AFKN), where he provided sets for shows such as “The Valiant â€andâ€œ Forgive Us Our Debts â€. Last summer, he designed the set for “Desert Song” at the Tacoma Little Theater, Tacoma, Washington.

He graduated from the Pasadena Playhouse, Pasadena, California.

Body: Two local men this week completed negotiations to purchase a liquor store in the Cathedral City section of Palm Springs, Calif., It was announced.

They are GH Gillan of Riverside, Inc., and Tom Stoneman of Dairy Bar. Stonemans will dispose of his home and business and will be dedicated to the new store full time starting October 1.

“But, contrary to rumors,” said Gillan, “the Dark Horse and the Riverside are certainly not for sale.”

Column title: Letter to the editor

On behalf of the Dark Horse players and myself, I would like to express our appreciation for your generous enthusiasm towards our group this past summer. Much of our success can be attributed to you and your excellent staff for providing us with excellent Trail coverage.

We are confident that Estes Park will be our home for many years to come, and we hope we can be a definite asset to the community. When all Estes Park traders realize our potential like you and look at us with the same welcoming spirit, we will truly feel at home.

Enthusiastic plans are in the works for the theater next summer. Hope to see you again in June.

(Note: in 1958, the group performing at the Dark Horse Theater (located in the former ice rink adjacent to the Dark Horse and Riverside Ballroom, as noted in the first post) were dubbed the “All-Star Collegiate Players” . “For the 1959 season, the (renamed?) Dark Horse Players performed” in a building right next to the Riverside Ballroom, which was once a swimming pool “according to the Estes Park Trail. From 1946 polio, the original riverside pool was replaced with a roller skating rink, so the two locations (old pool and old rink) are actually one. However, the confusion ( which can be personal and non-communal) last lifted The Weekly Column explains why early plays were sometimes referred to as â€œBack of the Dark Horse.â€ Were the Dark Horse and Riverside Ballroom connected , and were these two buildings s also connected to the old swimming pool / ice rink? Not just “connected” by nearby community, but sharing the same roof, the same walls or the same passages? A very useful letter to the Trail-Gazette from Carol Work Nussbaumer, prompted by Dark Horse’s first reminiscence and cry for help (which will be cited in more detail in a later article), includes this rental description: “The theater was on the bank of the Fall River just upstream from the confluence with Big Thompson – pretty much where the plaza and sensory garden now isâ€¦ When I was there the pool was covered with a wooden deck rather summary where we ventured only to wash the apartments so Greig [Steiner] could repaint them … Regarding the location of the theater: erase everything south of the park theater from your mind. The post office at that time was on Moraine Avenue – the rather circular building that is now a store, but the last time I paid attention there were still the tall columns in front. The Dark Horse bar and theater was accessible by road just off the park theater with parking pretty much down that road at the back of the outdoor store. The bar and theater covered most of what is now the cobbled square. As far as I can remember, there was no bridge over Fall River. Other topics covered by Carol Nussbaumer’s letter will be covered next week.)