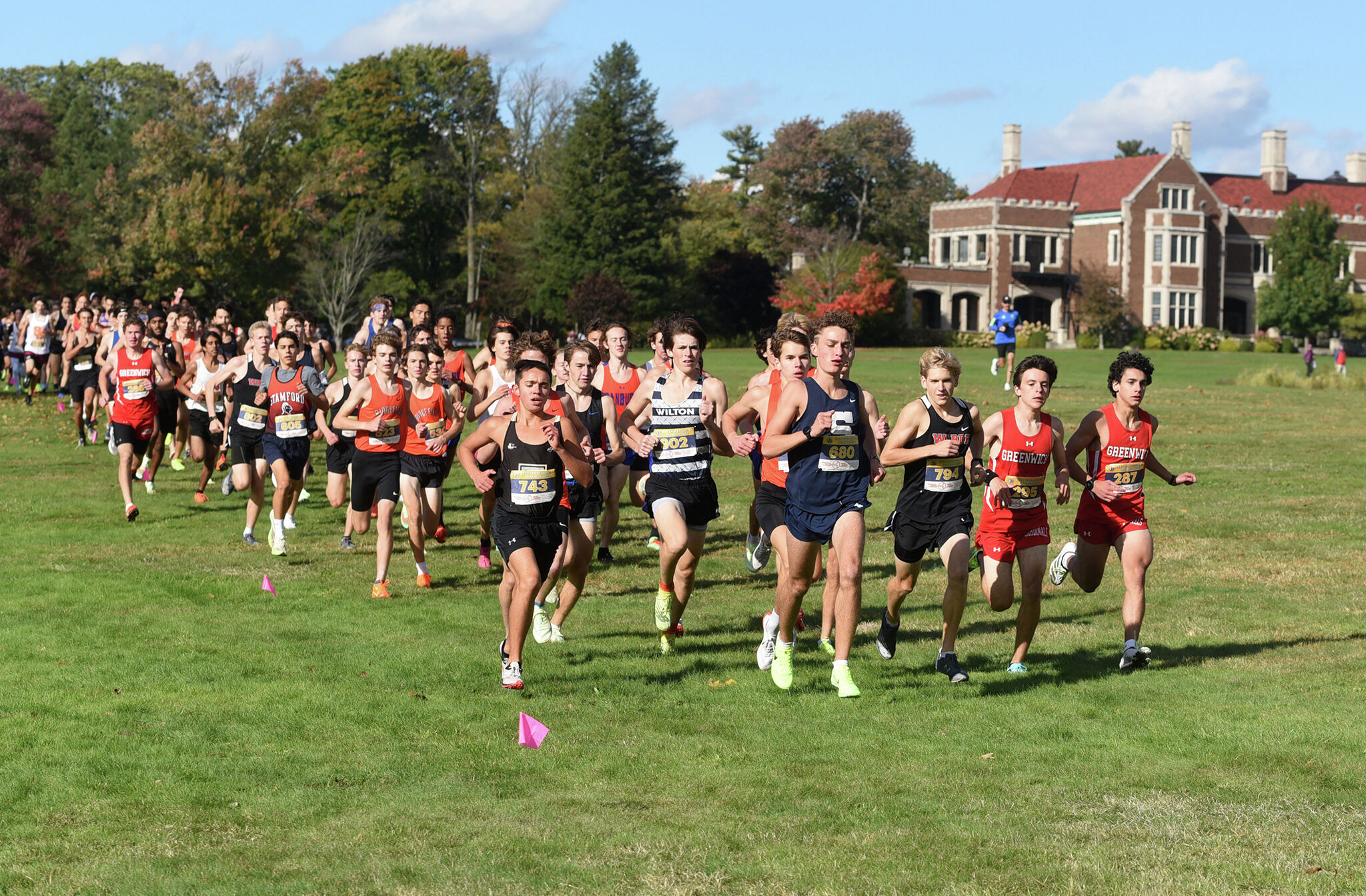 NEW CANAAN — Over the years, Danbury has been the most prolific men’s cross country team in the CFCFA when it comes to championships. More than 20 titles in 30 years will do it for you.

It would tend to make a seven-year stretch without a league crown seem like an eternity, but a “breakout” performance for the Hatters ended that drought.

With junior Devon Rosemark and senior Joshua Roos finishing in the top 10, Danbury overcame a tough Staples team and won their first FCIAC championship since 2015 on Wednesday at Waveny Park in New Canaan.

The Hatters scored 54 points, while the Wreckers had 64, with each team placing five runners in the top 17. Danbury has won 22 titles since 1991 and Staples has finished second or champion in eight consecutive seasons.

“We definitely have a strong historic program when it comes to CFCFA cross country,” Danbury coach Rob Murray said. “We’ve been solidly competitive for the past two years, but today the guys had a real breakthrough in the championship.”

Ridgefield, last year’s champion, scored 82 points and finished in third place with junior Steven Hergenrother winning the individual title with a time of 15:29 over the 5,000 meter course. Hergerother, who was fifth last year, won by 15 seconds over Warde’s Parker Broderick (15:44), with Trumbull’s David Carillo (15:47) third.

Hergenrother said he was ready for tough competition.

“I felt really confident,” Hergenrother said. “There are some really, really good guys out there, so I just wanted to hang out and have fun, and I did that and got the job done. I thought winning was definitely a possibility, but you can never underestimate other people in this race.

Towards the start of the race, Ben Lorenz of Hergenrother and Staples, who won the Wickham Invitational on October 8, converged on the road in the middle of the park and they raced step by step for a while.

After a few loops on the course, Hergenrother said he went downhill towards the woods and then held the lead the rest of the way.

The last hill isn’t steep, but it’s a long climb all the way to the end.

“I felt really good but going up you think there’s 200 meters to go and it’s more like 800,” Hergenrother said. “I’ve run this before so I knew that and decided to see how fast I could get up that hill.”

Danbury’s top runner was Devon Rosemark, a junior who moved up 23 places from 27th last year to fourth this season. He finished in 3:53 p.m.

“He’s learning not to worry about other people and to focus on what he can handle while performing,” Murray said of Rosemark. “I think he did a better job today and it kept him calm and focused on the race.”

“We have the utmost respect for Staples, (coach) Laddie Lawrence and their team,” Murray said. “We saw them at Bowdoin Park (September 24) and they beat us there. They beat us in a double encounter at Danbury, then we beat them at Wickham. We beat them today, but these guys fought well.